A press release received by The Southland Journal has stated the following: “Why is Rita Mayfield, an Illinois State Representative from the 60th District, who represents Waukegan, North Chicago, Gurnee, Beach Park and Park City, being paid $5,000 a month as a consultant to Calumet City? This consulting fee in addition to her base salary
as a State Representative which is $69,464.

“As a consultant to Calumet City, she is being paid $60,000 a year to restructure the Department of Inspectional Services which does building and code enforcement. To date there do not appear to be any reports, papers or work product produced. Her resume and
bio do not show any experience or expertise in this area of building codes or inspections services.

“The more interesting thing is that even with two jobs, both paid by Illinois taxpayers, Mayfield has time to lash out at City Clerk Nyota Figgs on social media with a series of lies and defamatory allegations.

“This raises the question, did Mayor/State Representative Thaddeus Jones actually hire Consultant/State Representative Rita Mayfield to work for Calumet City, or, just to be a crony in his bullying campaign against Clerk Figgs? The only thing we have proof of is
the bullying job, no proof on the consulting side.

“Mayfield and Jones have accused Clerk Figgs of not doing her job and publicly lied about the amount she is paid. At the same time, Jones has repeatedly tried to block her from being able to do her job.”

Screenshots of the social media comments were obtained by The Southland Journal and can be seen here: 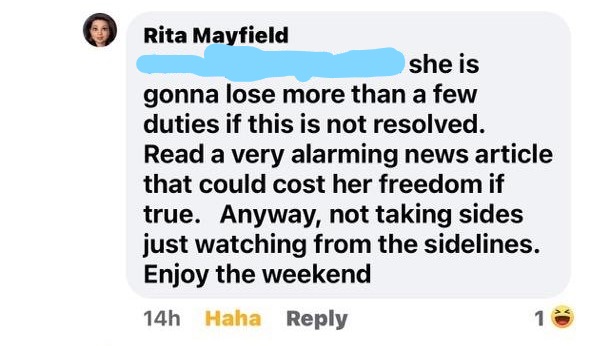 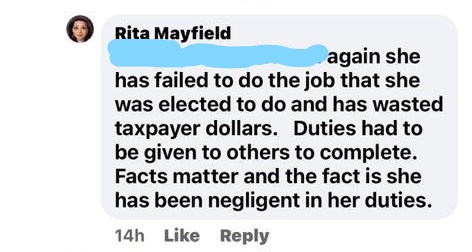 When asked of his thoughts on the situation, Wallace “Gator” Bradley, Figgs’ representative, said, “I find it to be absolutely disgusting that an elected official would take sides, especially Jones’ side, in this fight. In a world that is changing to ensure women are in equitable work environments, how can Ms. Mayfield vocally take the side of a bully? And as an elected official especially. It shows a complete lack of tact.