The Bulls beat the Nets 115-107 on April 4th, but Kevin Durant did not play in that game. Durant is one of the best players in the league when healthy and will make it hard for the Bulls defensively. Chicago was able to focus on Kyrie Irving in that last game, but team defense will be important in this matchup since that will no longer be the case.

Nets lead after having 20 assists in the 1st half

The Nets got off to a blazing start, making 7 of their first 8 shots. Irving was the main reason for that, as he scored or assisted on 13 of their first 18 points. Irving’s three-pointer put Brooklyn up 18-7 with 8 minutes left in the 1st. Zach LaVine was the first player in double-digits, as he kept the Bulls in the game. LaVine’s three-pointer gave him 10 points and cut the Nets lead down to 20-14. Brooklyn led 32-23 going into the 2nd, behind 13 points and 5 assists from Irving.

Bruce Brown scored 8 early points in the 2nd for the Nets, which extended their lead. Brown made a floater and assisted on a three by Joe Harris to put the Nets up 50-36, with 7 minutes left. Harris later made a layup off a pass from Nicholas Claxton, which was Brooklyn’s 20th assist in the 1st half. Harris put the Nets up 60-44 with 2.5 minutes left in the half. Brooklyn led 64-51 going into the 2nd half

The Nets were clicking on all cylinders in the 1st half, as they had 20 assists on their 24 made shots. Brown (15 points), Harris (13 points) and Irving (13 points) all scored in double-figures for the Brooklyn. In comparison, the Bulls only had 10 assists on their 20 made shots. LaVine led all scorers in the game with 17 points, but he needs help in the 2nd half in order for Chicago to make a comeback.

Durant and Griffin extend the Nets lead in the 3rd

To begin the 3rd, Kevin Durant made a pull-up jumper to give Brooklyn their largest lead at 68-52. LaVine and Coby White responded with consecutive three-pointers to make it 68-58, with 10 minutes remaining. Daniel Theis made another three-pointer to cut the Nets lead down to 74-65, but Durant had a huge block which led to two straight 3’s from him and Griffin. Mike James later made another three-pointer, to put Brooklyn up 85-68 with 5 minutes left. Griffin and Durant scored 16 of the 29 Nets points in the quarter. They led 93-74 going into the 4th.

Nikola Vučević stepped up to help LaVine, by making consecutive three-pointers to cut the Nets lead down to 105-97. LaVine scored the next 4 points for Chicago, making it 107-101 with 1.5 minutes left. Jeff Green delivered a dagger on the next possession for Brooklyn, as he scored off an assist from Durant. The Nets won the game 115-107

The Bulls made a late run, but Brooklyn was able to remain ahead. Brooklyn’s balance and ability to score easy baskets off assists were the difference in this game. The Nets had 31 assists and seven players in double figures against Chicago, led by Durant with 21 points and 8 assists. LaVine had a monster game with 41 points, but White was the next closest scorer with 13 points. Vučević also struggled as he only had 12 points, on 5/18 shooting. 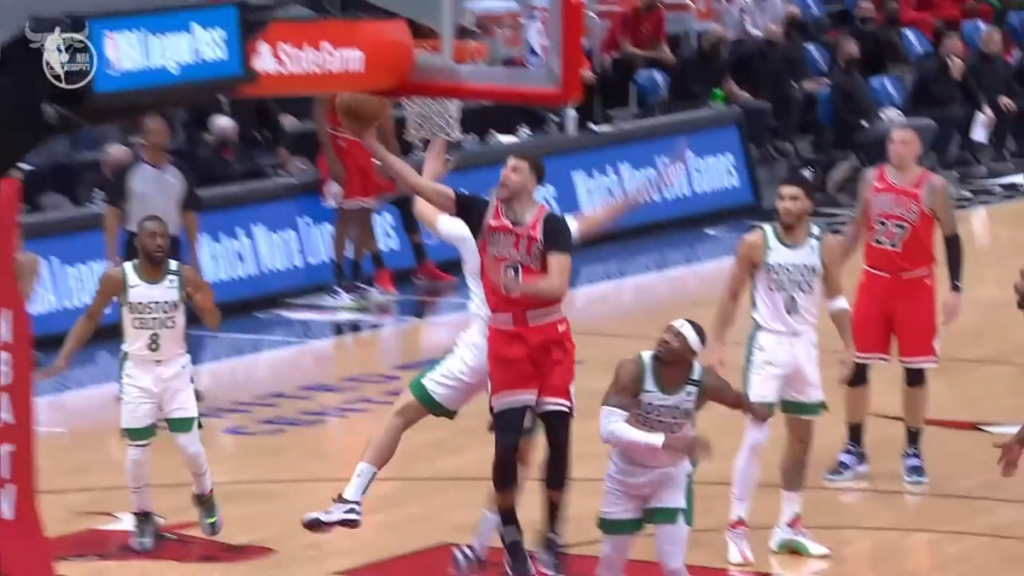