Brooks scores season-high 32, Grizzlies beat the Bulls (Memphis, TN)- In their last game, the Bulls lost to Nikola Vučević’s former team, the Orlando Magic. This was a game where the Bulls were out hustled, as they allowed the Magic to get 13 offensive rebounds. Chicago will have a chance to snap their four-game losing streak against the Grizzlies on Friday night.

When they played Memphis on Monday, the Bulls allowed Jonas Valanciunas to dominate, as he scored 26 points and grabbed 14 rebounds. Valanciunas is averaging 12.8 rebounds on the season, so stopping him will be no easy task but it will be important to the Bulls’ chances. Zach LaVine will also be out for at least the next 10 days due to health protocols, leaving a huge scoring void for the team to fill.

Bulls and Grizzlies play an evenly-matched 1st half

The Grizzlies got off to an early lead, behind at least one field goal from each of their five starters. Memphis’ balance led to a 16-13 advantage with 6 minutes left. Coby White had the hot-hand for the Bulls to start, as he scored 8 of those 13 Chicago points. White led the Bulls with 11 points in the 1st, more than he scored the past two games combined. Xavier Tillman had 9 points off the bench for Memphis. The game was tied at 33 going into the 2nd quarter

The Bulls bench began the 2nd quarter on a tear, making 4/4 shots in less than two minutes. Garret Temple hit a three-pointer to put the Bulls up 43-35, forcing Memphis to take an early timeout. The Grizzlies responded with a 14-3 run to take the lead at 49-46, with 6 minutes left. Chicago tied the game at 57 going into halftime.

White and Vučević led the Bulls in the 1st half, scoring 13 and 11 points respectively. The bench also contributed in a major way, with 22 points. Dillon Brooks was the only Memphis player to score double-digits, with 10 points. The Grizzlies did get 25 bench points and 11 points off turnovers though to keep pace with Chicago.

Brooks heats up, puts Memphis ahead going into the 4th

Memphis got off to a quick start offensively in the 3rd, as Ja Morant, Brooks and Grayson Allen each hit a three pointer. Valanciunas also scored on a layup to give them their largest lead at 72-64, with 9 minutes left. Thaddeus Young scored his 12th point of the game to cut the Memphis advantage to 82-76, but the Grizzlies countered with a 9-0 run. That stretch put them up 91-76 with 2.5 minutes left. Brooks scored 15 in the quarter, helping Memphis lead 94-85 going into the 4th.

Grizzlies close out the Bulls

Brooks scored a season-high 32 points to lead the Grizzlies to this win over Chicago. Five other players also contributed with double-digit scoring for Memphis. They also scored 26 fast break points, compared to only 3 for the Bulls.

White led the Bulls with 27 points and 7 assists, with Vučević adding 24 points and 14 rebounds. 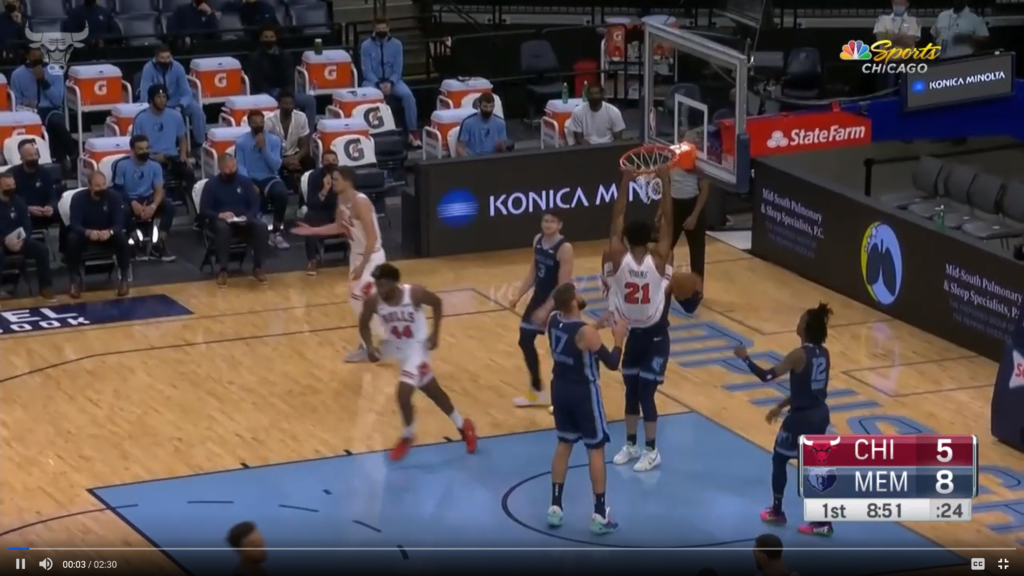 Grizzlies grant Bulls their 3rd straight loss (Memphis, TN) – Coming into this matchup against the Memphis Grizzlies, the Bulls have an opportunity to bounce back from two straight close losses in the 4th quarter. Memphis comes into this game on a two game losing streak as well.