Will County Treasurer Tim Brophy Accused of Blatant Electioneering  (Joliet, IL) – A campaign free zone has very strict campaign laws to prevent undue influence on voters. The law is violated across the country in countless locations, despite this. Those who violate the law must be held accountable. There have been allegations made in the blue suburban county of Will County, Illinois, as reports spread nationwide.

County Treasurer, Tim Brophy, allegedly committed electioneering inside of the Will County Clerk’s office by displaying his 6 foot banners within 20 feet of voting booths. According to Section 10 ILCS – 5/29, the Illinois state law on electioneering states that campaign material must be 100 feet away from the poll’s doors.

Similar actions have been deemed illegal in many jurisdictions in Illinois and around the United States,  as it persuades voters by giving a last second impression of who to vote for.

Previously reported by the Southland Journal is a press release from Will County Clerk candidate, Gretchen Fritz, which similarly accused the Will County Clerk, Lauren Staley Ferry, of electioneering herself; for posting materials that had her name and face inside of the “campaign free zone”. Republican candidate Gretchen Fritz made an official objection on Friday, October 14.

Fritz stated that she was completely disregarded by Deputy County Clerk Charles Pelkie. County Clerk Staley Ferry spoke with Fritz about the matter, but Staley Ferry made it clear that she believed she was not violating the prohibition against electioneering in polling places.

It was subsequently discovered that Will County Clerk Lauren Staley Ferry had removed all of the signage and printed materials that had her name emblazoned on them. A similar complaint has been reportedly filed with the county clerk’s office regarding the signage for Will County Treasurer Tim Brophy. As of 11/2/2022, his alleged campaign material is still up and visible. It is currently unclear whether or not the signage remains.

To report this election code violation inside of Will county, Illinois: Please contact the Will County Clerk’s office at https://www.willcountyclerk.gov/ or call 815-740-4615 for the main line.

It is unclear how many votes have been swayed by obvious attempts by the incumbent County Clerk and County Treasurer as the election draws near. Early voter traffic was staggering at the location. However, when instances arise, they need to be addressed. We asked Raj Pillai, the opponent of Tim Brophy, for comment on his opponent’s actions, but he has not yet responded. 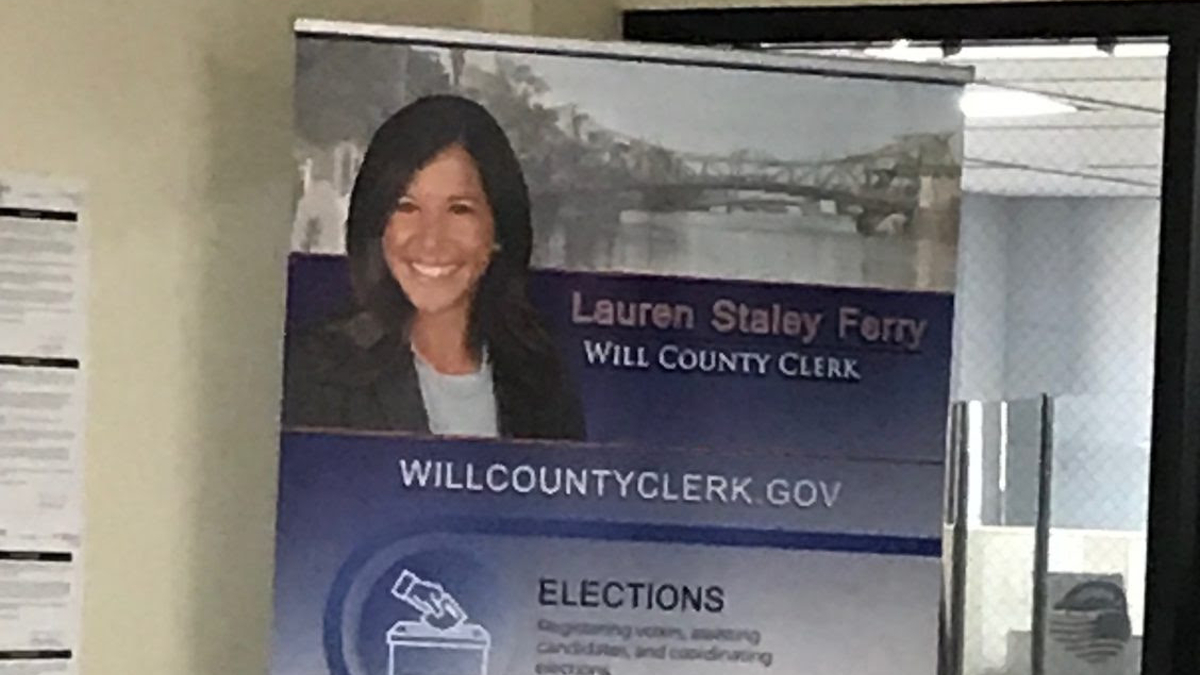 Surely the woman who runs the elections knows the election rules. But Staley Ferry sees no problem with her name and face appearing all over inside the polling place at 302 N. Chicago in Joliet.