Tatum is heating up at the right time for Boston, as they are trying to avoid the play-in tournament and earn at least the 6th seed. On the other hand, Chicago is hoping to squeak into the tournament. The Bulls are 3.5 games behind the Wizards for the final spot, with only 6 games remaining. Chicago needs every win they can get at this point, and keeping Tatum in check will play a big role in that tonight.

Bulls make 11 three’s in the 1st half

The Bulls were up 12-11 against Boston early on. Chicago received Daniel Theis from the Celtics at the trade deadline and his three-pointer gave them that lead with 7 minutes left. Evan Fournier reclaimed the lead for Boston at 24-22 with his 3rd three-pointer of the 1st. Fournier and Kemba Walker combined to score 22 of the Celtics’ 28 points in the quarter. The Bulls led 30-28 going into the 2nd, behind 7 points and 5 assists from Nikola Vučević.

Zach LaVine became the first double-digit scorer for Chicago, scoring 5 of his 10 points to begin the 2nd. LaVine’s three-pointer put Chicago up 39-32 with 9 minutes left. Vučević joined LaVine in double-figures behind another three-pointer, which gave the Bulls a 46-36 lead with 5.5 minutes left in the half. Coby White hit 3 three-pointers to end the quarter, helping the Bulls lead 60-46 going into halftime.

The Bulls made 7/13 shots from the three-point line in the 2nd, which allowed them to pull away from Boston, as they only made 2/10 from three. Chicago’s defense on Tatum was also a big factor, as he only scored 2 points. Walker and Fournier carried the Celtics offense in the half, scoring 30 of their 46 points. White and Vučevic both scored 12 for Chicago, with LaVine adding 10 points.

White and LaVine help Bulls pull away in the 3rd

Walker continued to be aggressive for Boston to begin the 3rd. He scored 10 of the Celtics first 14 points in the quarter, reducing their deficit down to 71-60 with 6.5 minutes left. Chicago outscored Boston 23-14 afterwards to lead 94-74 going into the 4th quarter. White and LaVine scored 16 of the team’s 34 points in the 3rd.

The Celtics scored the first 8 points of the 4th to remain within striking distance. They trailed 94-82 with 9 minutes left in the game. Grant Williams later made a three-pointer to cut the Bulls lead down to 98-90, with 6 minutes left. LaVine, White and Vučević responded by scoring the 14 of the next 16 points. The trio put Chicago up 112-92 with 3 minutes remaining. The Bulls won the game, 121-99.

Boston attempted to comeback in the 4th, but the Bulls had a strong response. After only scoring 4 points in the first 6 minutes of the quarter, Chicago scored 23 points to hold on and win the game. Vučevic led the team, registering his 2nd triple-double of the season(18 points, 14 rebounds and 10 assists. White and LaVine also had 25 points each.

Vučević registers a triple-double, leads Bulls to win over Celtics 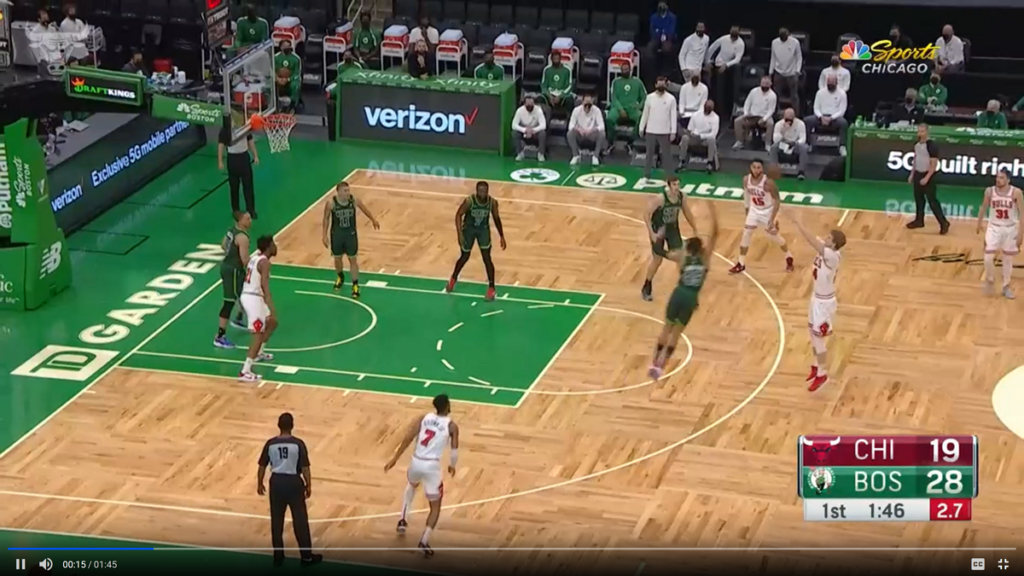 Vučević leads Bulls to big win over Boston (Boston, MA) – After snapping their 5-game losing streak by beating the Cavs on Saturday, the Bulls have a chance to create momentum on Monday night against the Celtics.