Heat lead by 1 after tightly-contested first half

The Bulls were up 5-3 to begin the 1st, but Miami went on a 10-0 run to take the lead. The Heat led 13-5 with 8 minutes left, with 6 of those points coming on the fast break. Chicago tied the game at 17 with 4 minutes remaining, behind 10 points in the paint. The Heat closed out the quarter well, as they were up 26-20 going into the 2nd. After only scoring 11 points through 3 quarters on Saturday, Jimmy Butler led Miami with 10.

Behind 3 assists from Thaddeus Young and 4 points from Lauri Markkanen, the Bulls cut into their deficit. Young and Markkanen’s efforts reduced the Miami lead to 31-30 with 8 minutes left in the 2nd. Miami responded with a 7-0 run in one minute. Even though the Heat only shot 4/18 from three in the 1st half, Trevor Ariza hit his 3rd three-pointer to put them up 38-30.

Nikola Vučević hit consecutive three-pointers to bring the Bulls within striking distance at 43-41, with 4 minutes left in the quarter. The 1st half was quite competitive, as there were 5 ties and 5 lead changes. The Heat led 53-52 going into the 2nd half, as Butler (16), Bam Adebayo (14) and Ariza (13) combined to score 43 of their 53 points. Vučević led Chicago with 17 points and 5 rebounds. Young also added 6 points, 8 assists and 5 rebounds.

Butler dominates in the 3rd quarter

Daniel Theis scored the first five points of the 4th to cut the Miami advantage down to 82-81.The Heat countered with a 8-1 run to go up 90-83. White responded with back-to-back three-pointers, to cut the Bulls deficit down to 90-89. Garrett Temple followed that up with a three of his own, to tie the game at 95 with 6 minutes left in the game.

Vučević scored or assisted on the next 6 points for Chicago, giving them a 101-97 lead with 3.5 minutes remaining. Ariza hit a three-pointer to cut the Bulls lead down to 2, but Theis scored on the next possession to put Chicago up 106-102 with 2 minutes left. The Bulls won the game, 110-102.

For the first time since March of 2019, two Bulls players had at least 20 points and 10 rebounds. Theis had 23 points, 12 rebounds and 5 assists. Vučević had 24 points and 11 rebounds. Four other Bulls players also scored in double-figures for Chicago

Vučević and Theis lead Bulls to win over Heat 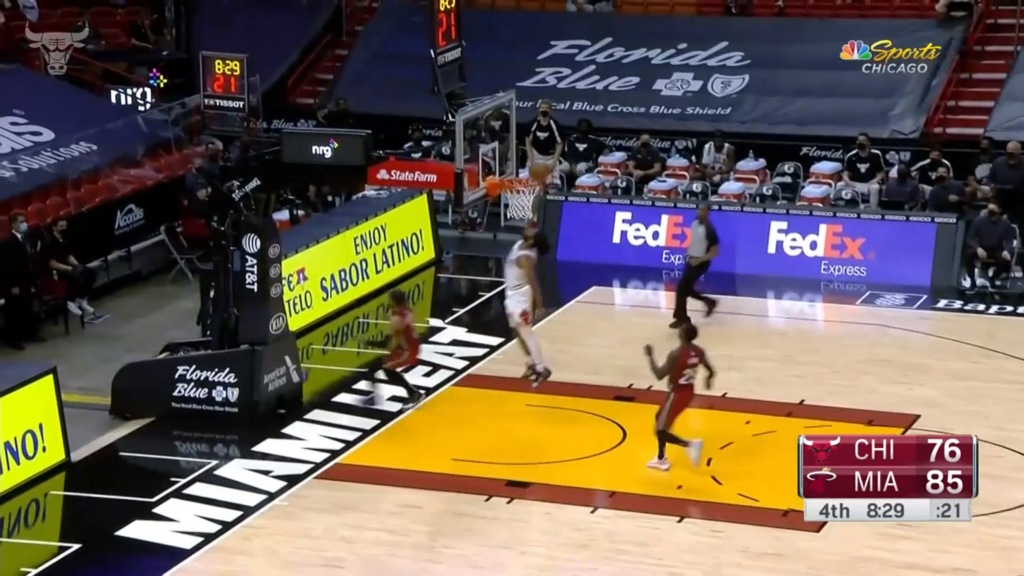 Butler prevents Bulls comeback, Heat win (Miami, FL) – Coming off their win against Charlotte, the Bulls will play a familiar face in Jimmy Butler and the Miami Heat tonight. The Heat have been up and down lately, going 5-5 in their last 10 games.

Vučević and Theis lead Bulls to win over Heat