Dozens of Robbins Residents Still Without Water (Robbins, IL) — The Village of Robbins shut off water to dozens of apartment units located on 13900 block of Central Park Ave. yesterday leaving residents without access to running water. The village says that the owners of the six apartment building have not paid the water bills, however the owners say that the village is overcharging for water and has not fulfilled obligations to update the water meters so that accurate usage can be accounted for.

Residents of the apartment complexes say that a notice appeared door informing residents of the impending shut off and outlined some of their rights as tenants under Illinois statute. One provision of the Rental Property Utility Service Act (765 ILCS 735/Sec. 1), but not outlined on the posted notice, states that, “…the provider of such service shall immediately restore and continue such service to any tenant who (a) requests that the utility put the bill in his or her name; (b) establishes satisfactory credit references or provides for and pays a security deposit pursuant to the rules and regulations of the Illinois Commerce Commission applicable to applicants for new utility service; and (c) agrees to pay future bills. Any sums the tenant or tenants, as the case may be, pay for water, gas or electrical service that the landlord or his or her agent was required to pay may be deducted from the rent due by the tenant or tenants, and the total rent is diminished by the amount the tenant or tenants, as the case may be, have paid for the continuation of the water, gas or electrical service.” Essentially, the law allows for a tenant of an apartment building transfer the service into their own name and make payments moving forward. The tenant is then allowed to deduct that amount from their rent payments. According to residents, they attempted to take advantage of this provision but the village did not allow them to make the utility transfer.

The owners’ attempts to make a payment arrangement have fallen on deaf ears, as they say that emails and calls to the Village Clerk’s office have been unanswered.

According to a statement released by the building’s owners, the apartment complexes have one water meter per building, however they are being charged a flat rate per unit. In other parts of the village, each individual water meter receives one flat rate bill. This flat rate does not take into account occupancy or other factors such as
consumption rates. A Metropolitan Planning Council report released in 2020 stated that “The Fast-Track Public Infrastructure component [of the Rebuild Illinois plan] aimed to accelerate projects to stimulate the economy by boosting employment and investment during the COVID-19 pandemic. The Village of Robbins applied to this program to fund water infrastructure projects including a new pump station, tank, and installation of data monitoring devices.” To date, the water meters in the village have not been fully updated and the residents continue to receive “unfair bills” that do not accurately reflect their actual usage. Builder owners say that they just want an accurate meter read.

A stop work order on a neighboring apartment complex was also issued yesterday after attention was brought to the water shut off and a local news van showed up. The new complex appears to be the same style as the existing buildings, and a reason for the work stoppage has not yet been issued. 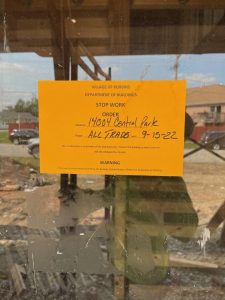 Attempts to reach the Mayor and village spokesperson have not been answered.