LaVine leads Chicago to win over Toronto (Chicago, IL) – Even after losing to the Brooklyn Nets on Tuesday night, the Bulls still have a chance to make the playoffs with 3 games remaining. Chicago can squeeze into the play-in tournament if they win their final 3 games and if the Wizards lose their last two games. The first of those final games for Chicago will be tonight against the Toronto Raptors.

The Raptors have already been eliminated from playoff contention and they only have 8 healthy players in the lineup tonight. Toronto is resting Kyle Lowry, Fred VanVleet, Pascal Siakam, among others. Given how everyone in the NBA is talented, it will be important for the Bulls to still lock in defensively and not play down to the competition.

Markkanen, Bulls shoot the lights out in 1st half

Toronto got off to a quick start, leading 9-2 within the first three minutes of the game. Behind consecutive three-pointers from Coby White and Nikola Vučević, the Bulls went up 11-9 with 7 minutes left. In his first career start, Toronto rookie Jalen Harris put together a great 1st quarter with 10 points. Vučević also had 10 for the Bulls, leading them to a 30-27 advantage going into the 2nd.

Chicago made 5 of their first 6 shots in the 2nd quarter to increase their lead. White also made his first three-pointer of the game to put them up 42-31, with 9 minutes left. Lauri Markkanen and Javonte Green also contributed off the bench, as they combined to score 17 points in the quarter. Markkanen made his third three-pointer of the quarter, to extend the Bulls lead to 62-44 with 4 minutes left. Chicago led 66-47 going into halftime.

The Bulls were dynamite from the three-point line in the 1st half, making 11/20 shots from distance. Chicago also prevented Toronto from shooting well, as they only 44% from the field in the half. The Bulls bench was also dominant, outscoring Toronto’s reserves 26-8. Markkanen and White both led Chicago with 12 points. Harris and Stanley Johnson led the Raptors with 12 and 10 points respectively

After only scoring 4 points in the 1st half, Patrick Williams scored 5 points to begin the 3rd. Williams’ efforts helped the Bulls extend their advantage to 75-51, with 9 minutes remaining. Toronto responded with an 11-2 run to reduce their deficit down to 77-62, with 6 minutes left. The Bulls also turned the ball over 8 times in the quarter, allowing Toronto to stay in the game. Johnson was the main reason for that, as he scored 11 points. The Bulls led 88-76 going into the 4th

Johnson continued to score in the 4th quarter, ultimately surpassing his previous career high of 27 points. He made a three-pointer to give himself 31 points and cut the Bulls lead down to 102-93, with 6 minutes left. Markannen, White and Vučević each responded with a basket to put the Bulls back up 109-94. LaVine later hit the dagger three, putting Chicago up 112-97 with 1.5 minutes left. The Bulls won the game,

Johnson had a huge night for Toronto, scoring a career-high 35 points to go along with 10 rebounds. The Raptors also had four other players in double-figure scoring, but the Bulls still won because of their efficiency on the offensive end. Chicago shot 54% from the field, made 17 three’s and had 31 assists.

LaVine led the Bulls with 24 points and 5 rebounds. White (17 points and 10 assists) and Vučević (16 points and 16 rebounds) also had double-doubles. Overall, Chicago had six players in double-figures to emerge victorious. 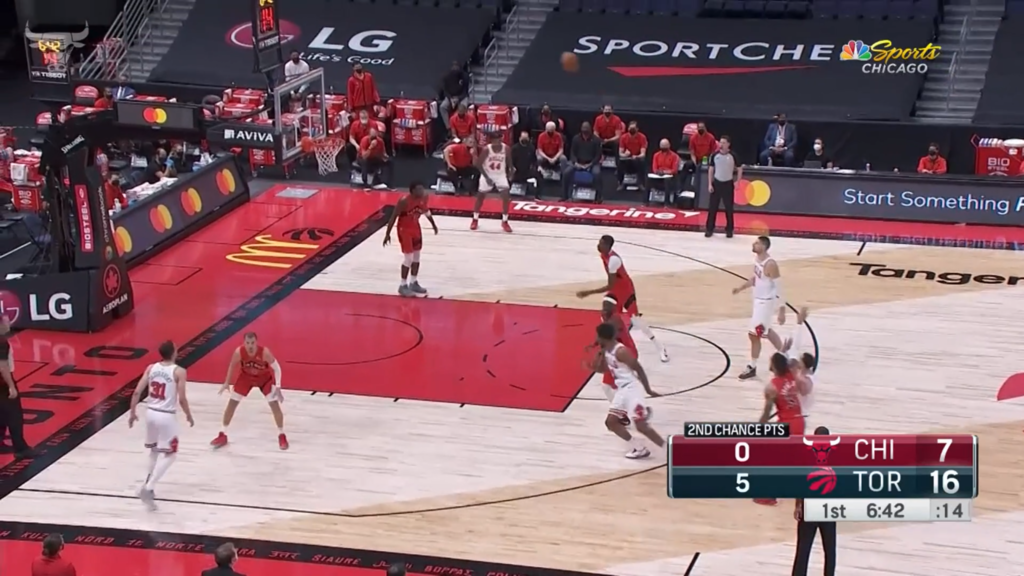