Philadelphia is led by Joel Embiid, who is currently having an MVP Caliber season, averaging 30 points and 11 rebounds. Slowing him down will not be easy for the Bulls, but Wendell Carter Jr. being aggressive on the offensive end will help. Ben Simmons is missing tonight’s game due to illness and Markkanen is out again for the Bulls.

Embiid dominates with 25, Sixers lead after 1st half

Carter Jr scored the first 8 points of the game for the Bulls, but Embiid matched that. Embiid scored his 8th and 9th points on an “and-one”, which gave Philly a 16-8 lead with 7.5 minutes left. Philly extended that to 30-21 towards the end of the quarter, but Chicago closed with a 9-2 run. The 76ers led 32-30 going into the 2nd

After starting 0/8 from three, Tomas Satoransky finally hit one for the Bulls early in the 2nd. His three pointer gave the Bulls a 39-36 lead, with 9 minutes remaining. Embiid and Tobias responded for Philly scoring 13 points, propelling them to a 15-7 run. That gave them a 51-46 with 3 minutes left in the half

Philly went into the 2nd half up 58-53 against Chicago. Embiid led all scorers with 25 points, adding 8 rebounds as well. Lavine and Carter Jr led the way for the Bulls, as they had 13 and 15 points respectively. Chicago’s 19-12 bench scoring advantage also kept them within striking distance, despite Embiid’s dominance.

Harris steps up in the 3rd, Bulls stay connected

Embiid scored the first 5 points of the 3rd to give Philly a 63-53 advantage with 9.5 minutes remaining. Lavine was later fouled on a clear path play, which helped Chicago reduce the lead to 65-63 midway through the quarter.

Philly had the first double-digit advantage of the game at 83-73 with 2 minutes left, but it didn’t last long. Garrett Temple scored 5 straight points, leading Chicago to a 6-0 run. Philadelphia led 85-79 going into the final quarter. Embiid had 12 in the quarter, but Harris stepped up with 8

Chicago’s bench led the way to begin the 4th, scoring 10 points within 3 minutes. Ryan Arcidiacono stole an inbounds pass and scored an “and-one”, to cap off their 10-2 run. The Bulls now led 89-87 with 8.5 minutes remaining. Embiid responded by scoring six of Philly’s seven straight points, as they were now up 94-89 with 6 minutes left.

Lavine hit his first three of the game at a critical point, as his shot reduced Philly’s lead to 105-103 with only 2 minutes left. Embiid countered with two free throws and a dagger jump shot, which put the 76ers up 109-103. Philadelphia won the game 112-105

The Bulls fought hard in this one, but Embiid’s career high 50 points were too much to overcome. Chicago also struggled from the three-point line, as they shot 7/32 from distance. Lavine led the team with 30 points, 5 rebounds and 5 assists 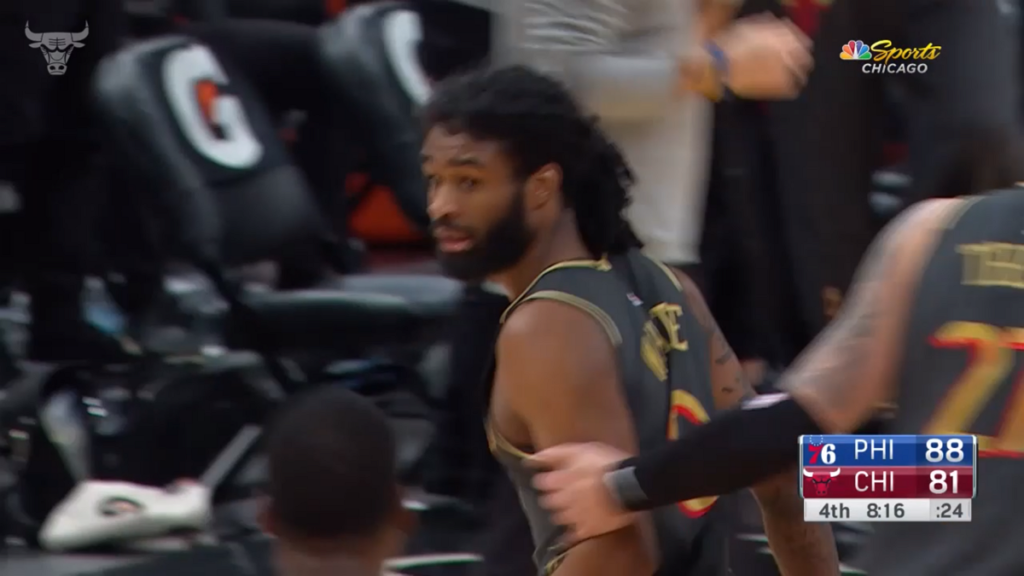