With two weeks until veto session and interest accruing, state’s unemployment fix still not decided (Springfield, IL) – The deficit in the state’s Unemployment Insurance Trust Fund remains over $4.3 billion and interest payments on the debt began accruing on Sept. 6.

Thus far, more than $6 million in interest has accrued on the money Illinois owes the federal government, according to the U.S. Treasury, and interest will continue to accrue at a rate of 2.27 percent. The state earmarked $10 million for interest payments this fiscal year.

Less than three weeks ahead of the fall veto session scheduled for Oct. 19-21 and Oct. 26-28. – the final six days of legislative action scheduled for calendar year 2021 – lawmakers have still not devised a plan for paying down the federal debt.

The ongoing interest accrual is one of two time-sensitive factors in addressing the deficit in the trust fund, which is the pool of money that is paid into by employers to fund unemployment benefits.

The second is that Illinois law has “speed bumps” written into it that would increase employer tax burdens and decrease claimant benefits beginning next year. Those “speed bumps” are built into law at regular intervals as a method of encouraging negotiations between business and labor based on the needs of the unemployment system.

Without action from the General Assembly, they take effect in January, shortening the benefit period for someone claiming benefits from 26 to 24 weeks, lowering wage repayment for claimants from 47 percent to 42.4 percent, and increasing by 16 points the state “experience factor” which determines an employer’s tax rate, while adding a 0.325 percent surcharge to employer tax rates.

Rob Karr, president and CEO of the Illinois Retail Merchants Association, said if those speed bumps take effect, it would essentially amount to $500 million in tax increases to employers and $500 million in benefit cuts for claimants.

Rep. Jay Hoffman, a Swansea Democrat and one of the lead negotiators on unemployment issues in the House, said unemployment discussions normally move forward as an “agreed bill,” meaning lawmakers don’t take action until Republicans, Democrats, business and labor sign off on a proposal. Karr is one of the negotiators on the business side.

There’s no agreement yet, but with veto session quickly approaching, Hoffman said, one option is putting off the effective date of the speed bumps until sometime in the future. While that would give lawmakers more time to understand the scope of the problem, it would also mean interest would continue to accrue at a rate of tens of millions of dollars annually.

“You could change the statute and extend it out, and I think there is a good argument to be made for that,” Hoffman said. “And the reason is … because we still are unclear as to how much and how big the deficit will be, number one. But number two, what type of federal assistance we may be able to still obtain in order to close that deficit. And then third, there’s the outstanding issue of whether or not some of the (federal) money can and should be used in order to close that deficit.”

One factor that makes things hard to predict, he said, is that added federal benefits only recently expired in mid-September, so the absence of those benefits could affect the number of people currently in the workforce.

In its September report to the Employment Security Advisory Board, the Illinois Department of Employment Security estimated the deficit could grow to between $4.55 billion and $4.68 billion by year’s end, and could reach as high as $5.14 billion next year in a pessimistic scenario.

Illinois still has between $4 billion and $5 billion in unspent money received through the American Rescue Plan Act from the federal government, and groups like IRMA have suggested using a large sum of that remaining funding to pay down the trust fund deficit to avoid “crippling” tax increases to already struggling businesses and benefit cuts to claimants.

Hoffman said “there’s a good argument to be made” that federal funding should be dedicated to reducing the deficit, but any discussion of doing so would be part of budget negotiations next year.

“And so that would generally, I believe, be a part of a larger budget discussion in the spring,” he said. “So I think there’s some logic to looking at extending the deadline to act.”

In a previous interview with Capitol News Illinois, Karr said the closest precedent the state has for addressing such a deficit comes from its effort to dig out of a $2.3 billion hole from 2010 which followed the nationwide financial crisis that began in 2007.

He was part of the negotiations to address that deficit, which ultimately included benefit cuts and raised premium rates for employers. But lawmakers also dedicated a portion of those premiums as a revenue stream to pay back 10-year bonds, which they used to replenish the trust fund. Those bonds were paid back in about 7.5 years, Karr said, and the trust fund was back above water by 2012, according to IDES. 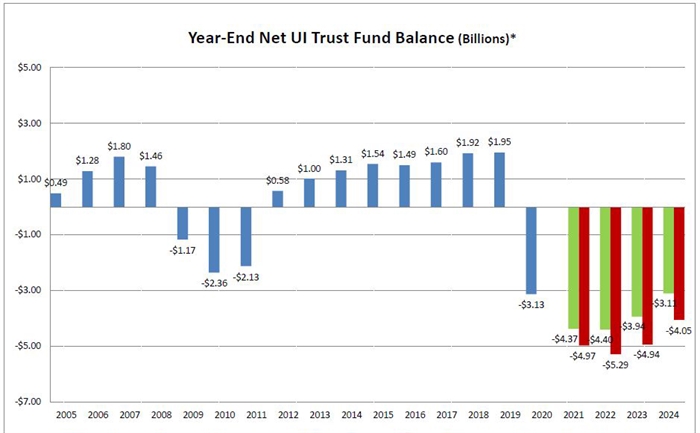