White Sox struggle to gain traction in playoffs (Houston, Texas) – After yesterday’s tough loss, the White Sox were ready to swing for the fences. In the 1st inning, White Sox batter Eloy Jimenez grounded into a force out but not before a run snuck on by. In the bottom of the 1st inning, White Sox pitcher Lucas Giolito took the mound and threw for 3 consecutive strikeouts. The Astros defense retaliated with throwing out for 3 strikeouts in the top of the 2nd inning. In the bottom of that inning Astros batter Kyle Tucker singled on a sharp ground ball for an RBI single. Next batter up was Astro’s player Chas McCormick, who was out on a sacrifice fly, but not before a baserunner made it home for the lead. By the end of the 2nd inning, the White Sox trailed the Astros 2-1. In the 3rd and 4th innings the White Sox were caught in double plays that advanced the game and made it difficult for the White Sox to gain traction. In the top of the 5th inning, White Sox batter Luis Robert singled to left field for an RBI to tie the game. Next batter up was Jose Abreu, who also hit a single for an RBI. After Abreu, Yasmani Grandal took the plate and hit a sacrifice fly for another run. The White Sox took back the lead with the score at 4-2. In the bottom of the 5th, White Sox pitcher Garrett Crochet replaced Giolito at the mound, and Astro’s batter Yuli Gurriel singled on a groundball for a 2-run single. The White Sox caught Astros in a double play soon after to advance the game.

By the end of the 5th inning, the score was tied 4-4. In the bottom of the 6th inning, White Sox pitcher Ryan Tepera replaced Crochet at the mound and the White Sox caught the Astros in another double play that inning to move the game forward. In the bottom of the 7th, White Sox pitcher Aaron Bummer replaced Tepera at the mound. Soon after, Astros batter Yordon Alvarez singled for an RBI and the lead. Bummer was replaced with Craig Kimbrel after the RBI Astros batter Carlos Correa hit a ball to right field for a 2-run double.  Next batter up was Kyle Tucker, who launched a ball to left center field for a 2-run home run. By the end of the long 7th inning, the Astros extended the lead with the score at 9-4.  In the bottom of the 8th, White Sox batter Liam Hendriks replaced Kimbrel to throw for a flyout and 2 strikeouts. In the top of the 9th inning, the White Sox offense fell to a groundout, flyout and a strikeout to close the game. The Astros beat the White Sox 9-4. 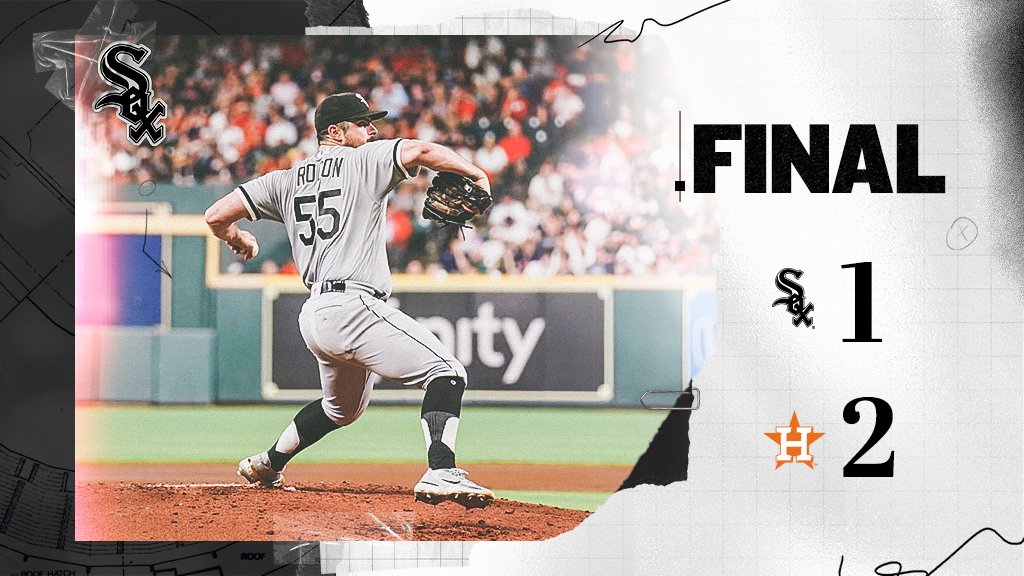