Bears Rout Giants 29-3 (Chicago, IL) — The Chicago Bears defeated the New York Giants 29-3 Sunday afternoon. The Bears capitalized on the Giants early mistakes, scoring 14 points off of New York’s turnovers. Former Bears quarterback Mike Glennon was sacked by linebacker Trevis Gipson on the first play of the game. Glennon also fumbled the football, setting Chicago up deep in Giants territory. Montgomery easily scored a rushing touchdown from the two yard line to give the Bears the lead. Glennon was picked off on the very next possession by safety Tashaun Gipson Sr. Dalton drove the Bears downfield and connected with Mooney on a 4 yard touchdown to give Chicago a 14-0 lead.

The Giants were hoping to go into halftime down two touchdowns (17-3), but somehow managed to take a safety and allow the Bears to convert a field goal all with under a minute left in the half.

Chicago scored on a two yard touchdown from Montgomery in the third quarter. It would be only points scored in the half.

Robert Quinn passes Hall of Famer Richard Dent with 18 sacks, the most in franchise history. It would be his only tackle on the afternoon. Dent had previously held the record since 1984 when he registered 17.5 sacks.

Quarterback Andy Dalton finished 18 of 35 for 173 yards, a touchdown and an interception. Mooney had 7 receptions for 69 yards and a touchdown. Montgomery rushed 22 times for 64 yards and two scores.

Bears improve to 6-10. Chicago travels to Minnesota to face the Vikings for their season finale. It could also be the last game for head coach Matt Nagy, as many speculate he will be relieved of his duties once the season concludes.

The Giants fall to 4-12 and will host the Washington Football Team next Sunday. 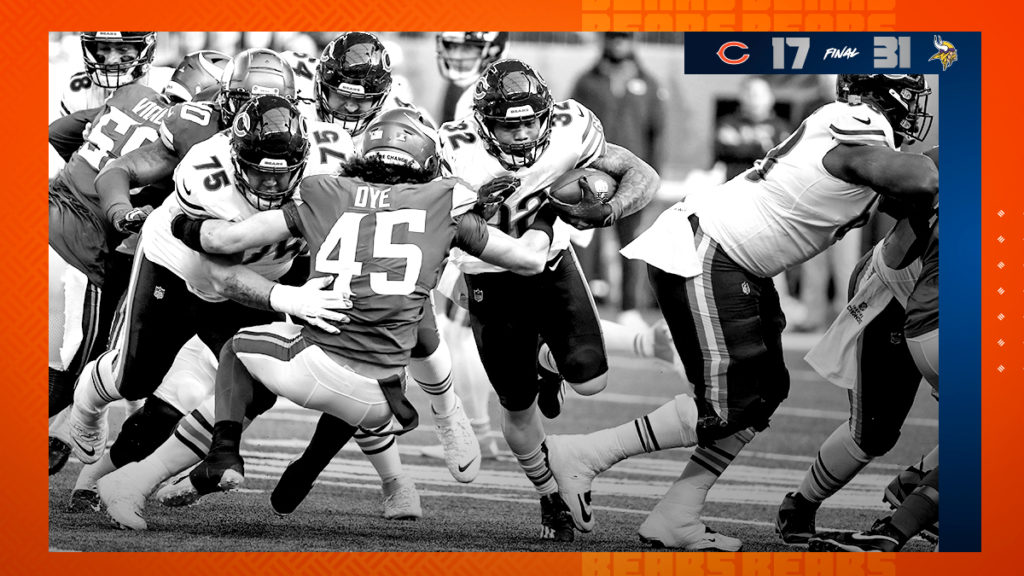 Cousins finished 14 of 22 for 250 yards, and helped Minnesota end the season with a win after losing their last two games.